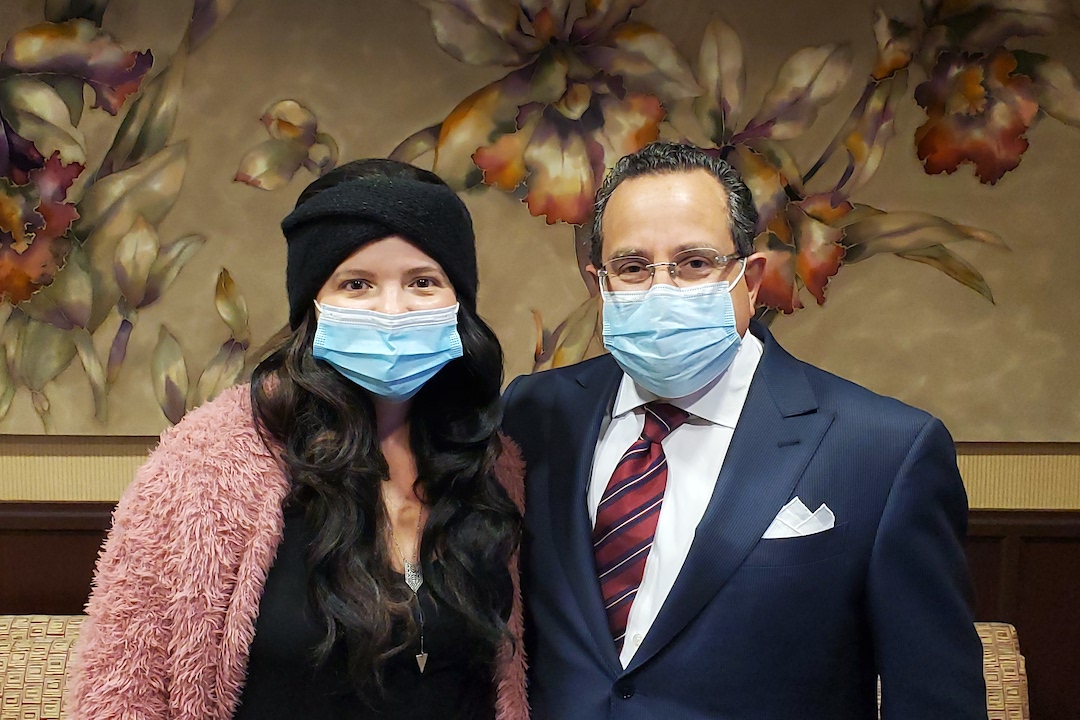 When Jennifer joined a NYBRA Sisterhood of Support meeting via Zoom from her car, she didn’t think too much of it.

“I am in nursing school. Mondays, Tuesdays, and Thursdays, my son goes to daycare on campus, and I go to the library to do work. That day it was time for the meeting, and I had to drive around the campus. So, I called in from my phone and put it in the dash,” she explained.

Jennifer was diagnosed with triple negative breast cancer when she was just 35 years old. She found a lump the day before her son’s first birthday.

“I’m no stranger to cancer, and I’ve kind of always felt that at some point I would get cancer, but I thought it would be much later in life.”

Jennifer wasn’t just young at the time of diagnosis: she was in nursing school, still breastfeeding, and planning to have more children. If breast cancer, fertility concerns and a new semester weren’t enough, the COVID-19 pandemic was unfolding in the background of her entire experience. As she managed her care school went remote, her son’s daycare closed, and she and her husband both started working from home.

Her indomitable spirit and natural tendency to multitask kicked in as her plate overflowed. Jennifer did a successful round of IVF and started chemotherapy without missing a beat. She finished her semester, and she never stopped exercising. Four weeks after her last chemotherapy treatment, she went in for a double mastectomy where Dr. Randall Feingold performed immediate TUG flap reconstruction.

Before she met Dr. Feingold, Jennifer said that she was not aware of how many natural tissue flap options were available. As someone who was too thin to be a candidate for DIEP flap reconstruction, she was relieved to learn that implants were avoidable.

“Jennifer is an example of a young woman who was determined to return to her life: as a wife, as a mother of a young child, as a nursing student and as an athlete. She was also determined to have a natural tissue reconstruction, and when we realized her abdomen was too small, she was not deterred. We were able to use her inner thigh tissue which is an excellent flap for achieving youthful breast projection. This creative use of microsurgery has already paid off dividends in the form of resilience after radiation therapy, and the ability to return her to physical sports such as kickboxing. She won’t have to manage the complications of implants after radiation, and she will likely have better sensation as well,” Dr. Feingold said.

“Mollie reached out to me; you don’t feel like you’re just a surgery. Mollie and I had a Zoom, and she spoke to my husband, and I felt so comfortable. It wasn’t just a doctor’s office. Mollie was able to connect me with someone who had the same surgery with the same surgeon,” she said.

Jennifer’s surgery revealed that her preoperative chemotherapy treatment had eradicated the cancerous tissue within her breasts, and her reconstruction was successful. As soon as Dr. Feingold cleared her to exercise, she jumped back into kickboxing. Still, she found herself grappling with the emotional realities of breast reconstruction.

“I had a nipple sparing mastectomy, and [my breasts] look so much like what I had before, I could barely tell the difference. My boobs do look pretty much exactly the same, but they obviously don’t function the same way. It’s still very emotional for me, the idea that if I have another child I won’t be able to breastfeed,” she said.

Jennifer said that Mollie and the Sisterhood have been helpful as she continues to move forward. Meetings are difficult to attend with a schedule as packed as hers, which now includes radiation. That’s what inspired her to get creative and join from her car.

“You multitask and figure it out. I really like Mollie a lot. I like her personality; I like her energy. I’ve attended a few SOS meetings so far. I really made it a point to get on that call that day, because with my schedule I wasn’t sure when I’d be able to attend again.”

Sisterhood of Support meetings occur every two weeks as a component of NYBRA’s comprehensive Patient Empowerment Program. All NYBRA patients work directly with Mollie to determine their best path to emotional recovery; The Sisterhood gathers those who are suited to group work, providing an opportunity to find support with women who are going through a similar process.

When we talk about breast cancer, we often talk about genetic testing. But what exactly does it evaluate? Who should get tested? And when? Melanie…