Skip to content
Home > Our Practice > Insights & Events > Extended Mesh Repair: A Novel Solution for a Novel Type of Hernia

Extended Mesh Repair: A Novel Solution for a Novel Type of Hernia 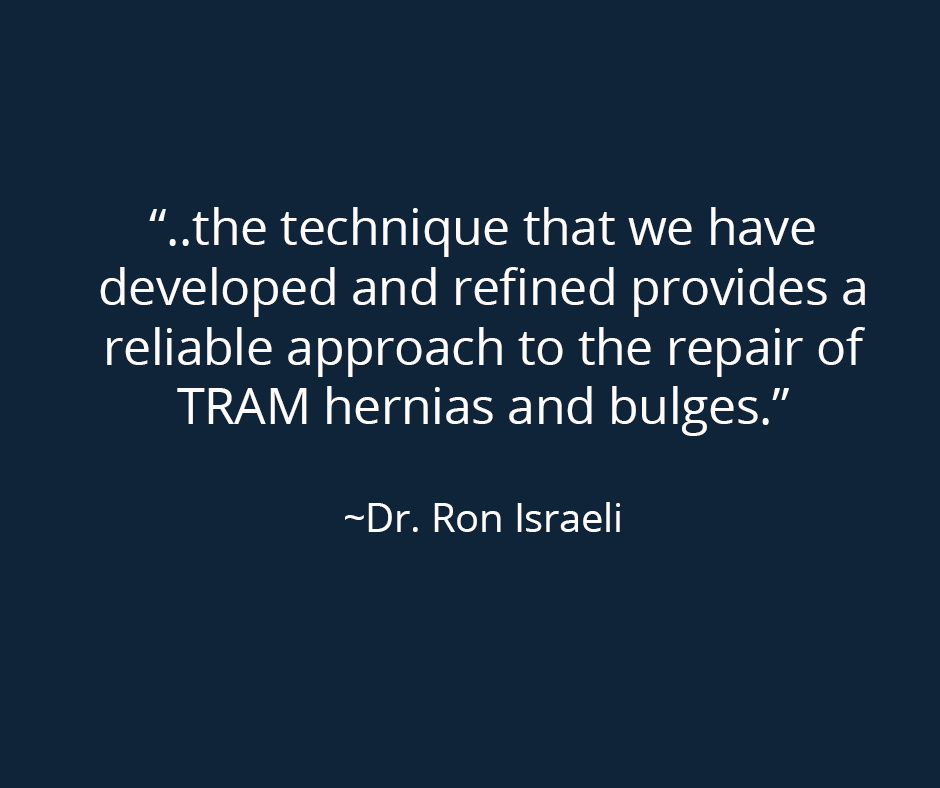 Donor site hernias are an unfortunate reality for some women who have undergone natural tissue breast reconstruction using abdominal tissue. While rare, for many years, they proved difficult or impossible to reliably repair.

Over the past twenty years Drs. Ron Israeli and George DeNoto worked together to develop and refine a reliable approach to abdominal wall reconstruction for these patients. They joined the DiepC Foundation on YouTube to present their Extended Mesh Repair approach.

Theirs is a novel anatomic technique that is among the first to provide a reliable repair for abdominal flap hernias and bulges. Read on for highlights from the presentation, or watch the whole thing, here!

The approach developed over several years.

Dr. Israeli and Dr. DeNoto met as residents. Dr. DeNoto went into general surgery, Dr. Israeli plastic surgery. Dr. DeNoto explained that he started seeing patients who developed bulges after TRAM flap operations. When traditional techniques failed, he turned to his colleague for more information on what was going on.

“That was when Ron and I really collaborated. I wanted a better understanding of what was going on with these TRAM flap hernias, and Ron enlightened me with that. We began working on this together and came up with this very anatomical—and now time-tested—repair,” Dr. DeNoto said.

Most patients do not develop a hernia after an abdominal flap breast reconstruction. While a hernia can develop after TRAM or DIEP flap breast reconstruction, it is much more common with the TRAM flap than it is with the DIEP. DIEP flaps preserve the muscle, which lowers the risk. The incidence of hernias in TRAM flaps, which sacrifice all or part of the rectus muscle, can be as high as fifty-perfect.

Dr. DeNoto said that many patients are not aware of any hernia risk at all. “[TRAM flap breast reconstruction] has a much higher incidence of developing a hernia or abdominal wall problem, and many patients don’t know this going in. They just know they’re going to have a piece of their abdominal wall removed, and the abdominal wall muscle will now become their new breast.”

The doctors explained that these ‘hernias’ are actually abdominal wall bulges, which happen when missing or neurologically compromised muscle causes healthy muscles to slide out of position, leaving the abdominal wall without vital support.

“The two innermost muscle layers on the sides slip away from where the rectus used to be, and they need to be, almost like a window shade opening they roll up laterally. We need to bring those two innermost muscle layers back to the middle, and the middle itself also thins out, we have to tighten that up also, and that’s part of restoring the normal anatomy,” DeNoto explained.

A bulge may not technically be a hernia, but it’s still important to repair it.

“It’s not just that it doesn’t look good—it doesn’t feel good. That bulge is symptomatic. Patients don’t have support, they can have pain, discomfort, it’s an issue,” Dr. Israeli said.

Even if it’s asymptomatic, a bulge should still be addressed, as all patients have some degree of fascial attenuation or weakness. “If you wait long enough and give it more time, weakness and thinning will get worse until it breaks,” Dr. DeNoto said.

“In order to tell what’s going on, you actually have to open up, release the external oblique muscle lateral to where the rectus muscle was, to the side of where the rectus is, and as soon as you open up that external oblique, it’s opening up a book. You can see the other layers of muscles underneath, and you can make a diagnosis of exactly where the weakness is, and that’s what you need to repair,” Dr. Israeli explained.

Dr. DeNoto continued, “Once we open up that external oblique, there should be two layers of muscle underneath that. What we’ll see is the peritoneum and the bulging just pops right out. [The muscles] retracted to the sides, and that’s part of the bulge, that’s part of the weakness. We need to find that edge of the two retracted muscles and bring it back and suture it to where it should be more medially.”

After the doctors have identified the area of weakness, they plicate it, and repair it directly. Then, they place the extended mesh. Rather than placing the mesh across the whole abdomen, they secure it to the strongest structures of the abdominal wall, the external oblique muscles.

The mesh used in this type of hernia repair is extremely safe and effective.

“There’s a lot of talk about mesh. The mesh we use has never been recalled; it incorporates very well. The patients’ own collagen grows between the fibers of the mesh, and it’s very, very rare that we have any issues with the mesh itself,” DeNoto said.

The Extended Mesh Repair technique is less invasive and more effective than other approaches.

“This is a reliable approach, it provides a nice aesthetic correction of the contour deformity, and one of the keys is that this is extraperitoneal. A lot of the traditional approaches to hernia repair—especially these large, TRAM donor site hernias—the surgeon is going to go through the midline, instead of laterally, where the problem is,” Dr. Israeli explained.

He and Dr. DeNoto went on to say that while going through the midline can be effective, it can also come with risks, side effects, and recovery challenges that their technique avoids by never going into the abdominal cavity.

Drs. Israeli and DeNoto hope that more surgeons learn about their procedure.

The doctors have performed this procedure on over a hundred patients, most of whom were referred to them by surgeons in other parts of the country. They’ve also presented this work at medical conferences in an effort to show their colleagues that patients need not continue to live with abdominal bulges.

Dr. DeNoto said that the Director of the Hernia Repair Institute at Cleveland Clinic used to send his patients to physical therapy, as he believed there was no successful repair option for this type of hernia.

Dr. DeNoto’s presentation was eye-opening for him: “Now, he does our operation, and he’s very pleased with it. Patients should know there’s always something we can do to help them. Patients come to us after sometimes ten or fifteen years with their bulge being told by their surgeons ‘live with it, because it cannot be fixed.’ It can be fixed.” 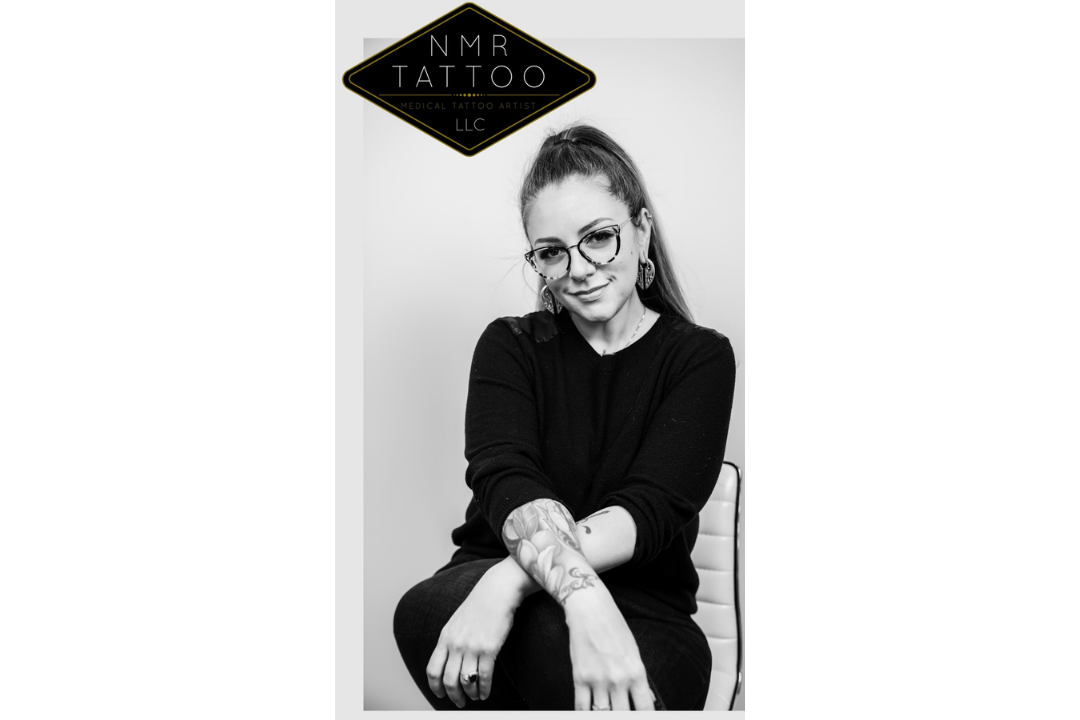 NYBRA’s resident medical tattooist, Nicole Rizzuto, started out as a body art tattoo artist. When she was diagnosed with kidney cancer, she switched gears. “I…